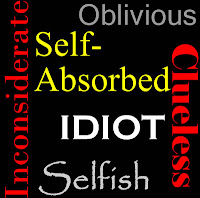 Sit back and let me tell you a story:

One day a couple of years ago, I made a trip to my local supermarket. I encountered 4 different people during this single trip; together, those 4 individuals confirmed for me what I always suspected:  people can be very selfish, and have no idea that they are.

1. When I arrived in the parking lot, I wanted to turn into one of the lanes so I could park, but the car ahead of me had to go forward or somehow get out of my way. Alas, that driver didn't see things my way, so he just...kinda...stayed...where...he...was for a while. He didn't seem to care that someone might be behind him.

2. When he finally moved, I drove toward an empty parking space that I had spied on the way in. It turned out to not really be empty, because another person in another car in the adjacent space went wayyyy past their yellow line and effectively took up two spaces. And they were in a smaller-than-average car, I might add. There was no need nor excuse to take two spaces.

3. Once parked, I walked into the store, I had to wait what seemed like an eternity as the person trying to grab a shopping basket decided it was a good time, and place, to rearrange the contents of her purse. She did it in such a way that I couldn't get to any of the other carts.

4.  No story set in a grocery store would be complete with out a person who managed to block an aisle so that none could travel past them. Once I got my cart and onto the cereal aisle, this shopper had her cart taking up the right half of the aisle, and her enormous self taking up the other half, as she carefully studied the ingredients listed on the box of each and every box of Pop Tarts in front of her. Rather than allowing me a way to get down the aisle, she just kept reading that label, so I went the long way around, down the next aisle, back onto the other end of the aisle she had been blocking me from.

The common thread between the 4 incidents, which, I promise you, happened during a single trip to the store: They all were made possible by people exhibiting an astounding lack of common sense and general obvliousness to the fact that there might be other people around who are affected by their decisions and actions.

In the spirit of Brangelina and Bennifer, I have decided to combine the fact that these people are (a) oblivious and (b) idiots into the the one-words description: obvliots.  The sad thing about the obliviot is that there is no known cure. And they are everywhere.

NOTE: I just googled the word "obliviot" and found that someone else already invented it, and it pretty much means what I said it means. I had no idea. Must have heard it somewhere and remembered it in the back of my head. Oh well. I didn't invent the word, after all.

jake said…
The scary thing about this is I am an obliviot. Sometimes, I'm not aware of my surroundings. The scarier thing is that I probably snap out of it long enough to notice other obvliviots and want to destroy them.