Eyes on My Father 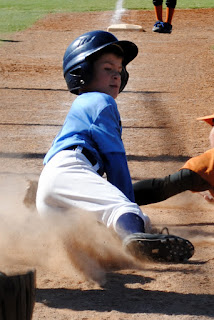 DING!  With a swing of the bat, the little white ball, headed toward the catcher’s mitt, was forced to do an about-face, and was now outfield-bound. The 11-year-old batter, realizing the ball was well-hit, was determined to stretch this one into a double.  As he rounded first base, the right-fielder reached the ball. The runner headed toward second as the outfielder scooped up the ball, transferred it to this throwing hand, then let it fly toward the infield. As the runner slid into second, the ball came in, just a tad late.  Jacob was safe with a double.
With a big smile on his face, he stood up and looked toward the dugout, where his dad, the team’s manager, was standing and cheering. The son’s eyes locked in on his father’s, and they shared a proud smile.  Neither noticed the noise around them, but it sure was loud.


That loudness was a combination of 40 or so adults cheering, clapping, and yelling not-very-helpful instructions to the players. Half of them were parents on Jacob’s team, yelling while the play was unfolding, cheering him on from the moment of the “DING!” to the moment the umpire yelled “SAFE!”. The other half of the noisemakers were parents from the other team, encouraging their fielders as they tried to throw that runner out, and then, once the play had ended, congratulating them for the effort.
Despite the noise, the boy on second base had narrowed his focus. He didn’t care that a bunch of other kids’ moms and dads were cheering him on; he just wanted his eyes to confirm what his heart already knew: Dad saw, and Dad is pleased.
At the moment I caught Jacob’s eyes as they locked in on mine, I realized my son was painting a picture for me of the ideal way any child of God should live their life: to push aside all other distractions and focus on pleasing his Father.
For much of my life as a Christian, I’ve viewed pleasing my Heavenly Father to be a nice bonus as I pursued what pleased me. I’ve paid way too much attention to the applause of those around me: the ones offering their approval as well as those voices which urge my defeat. I’d have experienced immeasurably more joy if I’d just blocked them all out and let the approval of my Father be my primary motivator.
Don’t read this the wrong way: God doesn’t love me more if I perform for Him than if I don’t, just as my love for my son doesn’t increase or decrease as his batting average rises and falls.  My heavenly Father has already demonstrated His love for me in the ultimate way: by sending His Son to die in my place. Neither the quantity nor the quality of His love for me can increase beyond that.   This isn’t about earning His love. This is about blocking out all distractions, and making Him the only One that matters.


I’m reading a powerful, fascinating book by Mary DeMuth, titled “Everything”.  The author describes her newfound priorities this way: “We [she and her family] want to live a life where we crave the things of God, hunger for righteousness, and worry more about what God thinks of our reputations than what others think.”
DeMuth’s description of living for God is about so much more than a ticket to Heaven or material blessings. “The gospel…shouldn’t merely be the crutch we fall on when life gets ugly. It should be the legs we walk on, the air we breathe.”
The point of focusing on pleasing God isn’t to win His love or (especially) to earn salvation; by making it all about Him, we know Him better, and we give Him an opening to impact the world through us:
“So that you will walk in a manner worthy of the Lord, to please Him in all respects, bearing fruit in every good work and increasing in the knowledge of God;” Colossians 1:10


A few minutes after Jacob stood on second base, he came around to score our first run of the game, and that moment is captured in the photo above. Scoring a run after a double is nice, but when we make eye contact with our Father, and know that we have pleased Him…well, that’s irreplaceable.

Mary DeMuth said…
What a beautiful post. You are a terrific father, and your Heavenly Father delights in you. :) Thanks for sharing my book.
November 15, 2012 at 10:14 AM