Them Dents is Valuable 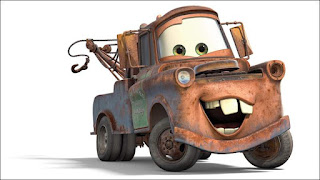 I guess I am spoiled, but for a Pixar film, "Cars 2" falls a little short, if only because the bar has been set insanely high by the quality of recent masterpieces such as "Toy Story 3" and "Up".  Any comparison of "Cars 2" with other recent Pixar output just isn't fair.

Quality aside, "Cars 2" hardly seemed like a sequel. The tone, the look, and the feel are very different from "Cars". Additionally, the plot was hard to follow and a little convoluted.

Despite the flaws, this film had one shining moment; one profound line in a decidedly non-profound movie, and it was delivered by Tow Mater.

Mater, you may recall, is a tow truck who's in dire need of mechanical attention. He has a missing hood, several dents, and rust issues. He's also a lovable doofus, lacking anything that resembles sophistication.

At one point in the movie, British secret agents decide to bring Mater into their plans to catch the bad guys and save the world. One problem: to use Mater in an undercover role, they must give him a new paint job. At first, Mater is in favor of the idea, but then he learns that the paint job requires him to lose several dents he has collected over the years.

"No!", he says in his unique southern drawl, when he's told the dents have to go. "Ever one of them dents is valuable to me".  Those dents, we learn, remind him of a time when something hard happened in his life. The dents, you see, have made Mater the man, so to speak, that he is today.


Despite my status as a non-truck, I see the parallel in my own life. My human heart has dents, bumps, and bruises in it which have accumulated over the decades. I didn't enjoy receiving them at the time, but I embrace them now. I do so because I recognize, as Mater does, that I am shaped, not so much by the dents themselves, but by the process I went through in receiving them, and in recovering from them.

This idea isn't new. The Apostle James said it this way: "Consider it all joy, my brethren, when you encounter various trials, knowing that the testing of your faith produces endurance." --James 1:2-3

Many Christians know those verses, but the idea isn't complete without the next one:

Verse 4 "And let endurance have its perfect result, so that you may be perfect and complete, lacking in nothing."

Results matter. Tests can produce hurts, which can lead to endurance, which leads to a life that is changed for the better. A bumpkin named Mater demonstrates an admirable level of wisdom by recognizing the value in his dents, and the place they have in his life. Perhaps we can all learn from him.