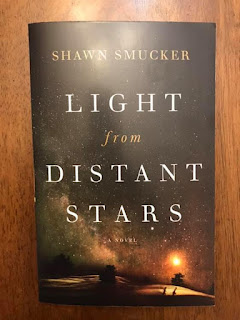 Nearly 3 years ago, I watched a brand new NBC series called "This is Us", and its unique format got my attention. What set this show apart was its practice of devoting a large portion of each episode to flashbacks. This innovative method of storytelling allowed the viewer to see cause and effect: what happened to Randall at age 8 has shaped him as an adult and informed his attitudes, motives, and actions as a 37-year-old.

Unfortunately, the network's marketing arm decided to downplay this distinction, and instead focus on how many times the show could make viewers cry. Not to belabor the point, I'll just say that I really wish they hadn't. The best thing that "This is Us" brings to the table is its decision to alternate between depicting its characters today and back then, but the network decided to focus on something less substantive.


When reading Shawn Smucker's newest, "Light From Distant Stars", I couldn't help but draw a connection to the NBC show.  Like that TV series, this story is told by alternating between modern-day scenes and flashbacks to what transpired in the lives of the younger version of Cohen (the main character), his family, and friends. [Smucker makes it easy on the reader: chapters set in the past use past-tense verbs, while present-tense language is used in the chapters set in 2015]

To be clear, there's much, much more to "Light from Distant Stars" than the past/present storytelling format. Cohen is a middle-aged man who questions his role in the apparent death of his father. As he considers all that has led up to this tragedy, he reflects on recent events as well as those that transpired when he was a child growing up; this process allows him to slowly unpack important events which affected him and made him who he is today. Other characters in the story are instrumental in helping Cohen move forward and become who he needs to be: a broken man, in the process of healing, of restoring relationships, and connecting with new people in his life.

Don't let the above description give you the wrong impression: "Light from Distant Stars" is not just a bunch of navel-gazing and dialog. There's some excitement (particularly the last 50 pages or so). There's a journey. An adventure. And a bad guy or two.

I've only read one other book by Shawn Smucker: "The Day the Angels Fell", which I found to be very enjoyable. But that one was aimed at a younger audience.  This story worked well for me, a non-teen.

Is the book worth reading? Absolutely. I'm not big on scales of 1-10 or 1-5 stars, so I'll just say that "Light from Distant Stars" is on the border between very good and excellent. Shawn Smucker is a gifted storyteller. His writing shows some influence from Billy Coffey, with a light touch of Stephen King, but Smucker ultimately has a style all his own.  Despite its 386-page length, the story moves very fast, with no superfluous filler; I found it to be an easy read and was sorry to see it end.  I'm already looking forward to his next one.

I reviewed a pre-release copy of this book which was provided for me by the publisher, and the official release day will be Tuesday July 16.  I highly recommend it.