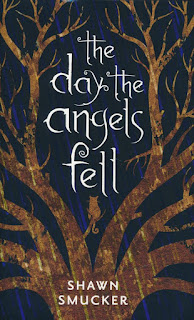 A few years ago, I encountered Shawn Smucker's writing via the late, great Burnside Writers Collective website. In addition to Burnside, his work has been featured as part of several different projects, but "The Day the Angels Fell" is his first novel. It tells the story of 12-year-old friends Sam and Abra, who react to Sam's mother's tragic death by embarking on a quest to bring her back to life by any means necessary. Unbelievably, the means to do so present themselves in short order, and the quest is on. These two friends make deals with angels, figure out a mystery or two, and fight heroically, all while battling grief and fear, and coming to some hard but necessary conclusions about the important role that death plays in our world.

This book contains all the elements I love in a work of fiction:
(1) an original story that not only holds my interest but grips me;
(2) multiple distinct characters with understandable and realistic motivations;
(3) just enough familiarity to remind you of other authors (Billy Coffey and Stephen King come to mind) without actually copying any of them;
(4) a satisfying ending with no copouts;
(5) a story that has depth and a meaningful message without being preachy.

I'm glad to say that "The Day the Angels Fell" hits a home run with all 5 of these. I truly hated to see this book end, but the good news is that the ending left open the door for more stories featuring many of the same characters.  If someone were to take a stab at making this into a movie, I can't say I'd be surprised.

I've known for years that Smucker is a talented writer; "The Day the Angels Fell" demonstrates that he's a skilled storyteller, as well.

Disclaimer: I received a copy of this book for review purposes.