August 09, 2011
This passage looks longer than I usually start with, but it's a quick read, and an interesting story:


Luke 4
v.15  And He [Jesus] began teaching in their synagogues and was praised by all.
v.16-17  And He came to Nazareth, where He had been brought up; and ...He opened the book and found the place where it was written,
v.18-19  "THE SPIRIT OF THE LORD IS UPON ME, BECAUSE HE ANOINTED ME TO PREACH THE GOSPEL TO THE POOR. HE HAS SENT ME TO PROCLAIM RELEASE TO THE CAPTIVES, AND RECOVERY OF SIGHT TO THE BLIND, TO SET FREE THOSE WHO ARE OPPRESSED,  TO PROCLAIM THE FAVORABLE YEAR OF THE LORD."

v.22  And all were speaking well of Him, and wondering at the gracious words which were falling from His lips; ...

v.24  And He said, "Truly I say to you, no prophet is welcome in his hometown. "But I say to you in truth, there were many widows in Israel in the days of Elijah, when the sky was shut up for three years and six months, when a great famine came over all the land;
v.27  "And there were many lepers in Israel in the time of Elisha the prophet; and none of them was cleansed, but only Naaman the Syrian."

v.28  And all the people in the synagogue were filled with rage as they heard these things; 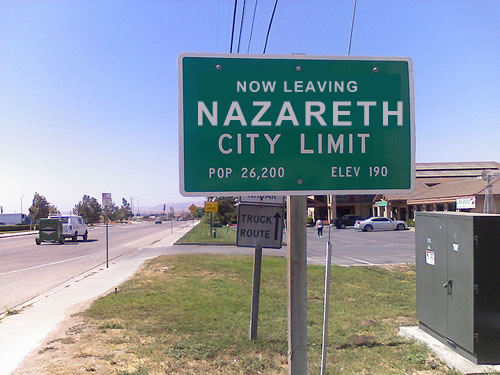 This snippet of the event of a Saturday morning is fascinating.  When Jesus was telling the people what they wanted to hear, they loved Him. When He had hard things to say, critical things they needed to hear, (in this case about their lack of faith), Jesus quickly fell out of favor with them.

I see this happen in my own life, and it's something I am working on. Once I realized that all of God's words toward me are for His glory and for my benefit, it will be easy. It's getting easier, but I have a ways to go.

More importantly, there are many more Christians in the same place as the angry citizens of Nazareth. I am finding this out lately in discussions I am having, and blogs I am reading, from many Christians of all stripes. Topics like hell, sexual sin, and social justice seem to bring this out in people.

Some folks embrace the idea of a loving Jesus, but not the judgmental one. Some like the idea of a politically conservative God, but ignore His liberal tendencies toward the poor, and insisting that the rich forgive debts. Some see God being against needless deaths in one context, but aren't as concerned about protecting innocent life in other contexts.

What we need to do is get to know His words to us. All of them. And live them out in the course of our daily lives.

Even the ones that make us uncomfortable.

Even the ones that conflict with the political party line.

Even the ones that challenge what we have been taught.

Even the ones that make us examine our opinionated positions to be sure they are in line with His will.

Even the ones in conflict with the denomination we belong to.

Even the ones that don't mesh well with the stance taken by that author we really like.


If we aren't ready to do so, then are we any better than the Nazarenes who liked Jesus one minute, then drove Him out of town?

JG said…
I think sometimes it comes down to people trying to make a God in their own image, or a God who fits their agenda or their opinions. This happens both within and outside of Christianity. NonChristians will like certain aspects of God - His love, His concern for the poor, His kindness. But they don't like ceretain others - His justice, His wrath, His judgment for sin. ANd in Christianity you have some people who think that God is a Baptist or that God is a...whatever. What we all need to do is simply look at God for who HE says He is and stop trying to make Him what WE want Him to be. Great post.
August 10, 2011 at 8:53 AM