March 17, 2020
Let's start by asking you to think of one great man from the Old Testament. Who comes to mind?  When I ask myself the question, the first man who comes to mind is Moses, or possibly David. Or Daniel or Isaiah. Maybe Samuel, Elisha, or Elijah. These guys are pretty much the upper echelon of God-following men in the years prior to the arrival of Jesus. They are Hall of Famers.

If, instead of those men, you thought of Josiah, pat yourself on the back. Josiah doesn't get as much attention as the others, but his actions and dedication to God were remarkable. He was a true hero of the faith.

To understand why, you'd need to recall what events led up to Josiah. Go back to the Exodus: the Israelites, after years of slavery, were led out of Egypt by Moses. When they arrived at the edge of the promised land, Joshua led them into their new/old homeland. Once they fully occupied the land, Joshua gathered the leaders of each tribe together, and gave them a talking-to.  This is in Joshua 24, and you have most likely familiarized yourself with one very well-known line from his message to those leaders:

"As for me and my house, we will serve the Lord."

But the context is key here. In the verses just before and right after that sentence, Joshua reminded them that their people had a history of worshiping idols, and there's a danger if they return to those practices. He mentioned that their forefathers had settled for serving lesser, false gods like Asherah and Baal. He mentions the idols by name, and then God by name (the original Hebrew in this verse for "the Lord" is "YAHWEH").

My paraphrase: Your fathers served Asherah and Baal, but you're going to have to choose, this day, who you will serve, but as for me and my house, we will serve YAHWEH.

After Joshua died, Israel was led by judges, then by several kings, starting with Saul, who was a good king at first, and then he was.... not so good. David succeeded him, and David was a good, though not perfect, king. Then came Solomon, who started out great, but his lust got the best of him, and he brought in women from other nations, who brought their false gods with them.

The next several kings were mostly pretty bad, and they allowed the people to focus their worship on idols. The Temple itself--God's dwelling place--housed shrines to Baal and Asherah. One king after another allowed this to go on, and finally, God let King Manasseh know that He had had enough:

2 Kings 21: 12-15
Therefore this is what the Lord, the God of Israel, says: I am going to bring such disaster on Jerusalem and Judah that the ears of everyone who hears of it will tingle. I will stretch out over Jerusalem the measuring line used against Samaria and the plumb line used against the house of Ahab. I will wipe out Jerusalem as one wipes a dish, wiping it and turning it upside down. I will forsake the remnant of my inheritance and give them into the hands of enemies. They will be looted and plundered by all their enemies; they have done evil in my eyes and have aroused my anger from the day their ancestors came out of Egypt until this day.

God promises destruction, but before He carries out this promise, we get to Josiah. Josiah was made king at age 8, and by the age of 16, his heart started to turn toward God. In his 20's he ordered that the temple would be cleansed. In the cleansing process, a written copy of God's word was discovered. Shaphan the scribe brought it to Josiah and read it out loud, which opened Josiah's eyes. Opened his eyes to the truth of what God's people had been doing.

Josiah was horrified. He had come to the realization that his people had offended God to a massive extent with their idolatry. His response was to tear his clothes, and get on his face and repent. He ordered the idols to be brought out of the temple so they could be destroyed.

Josiah then did what good leaders do: began doing the next right thing. He began to rebuild and repair the temple. He threw himself head-on into full-blown repentance. His remorse was based not so much on his own sin, because even though he knew it wasn’t his fault, the actions of his people were his responsibility. He was willing to be held accountable for the people he had been leading.

Good news: in 2 Chronicles 34:27-28, God declared that He was now willing to hold off on His promised destruction as long as Josiah was king. He specifically mentioned Josiah's heart and his actions as the reason.

More good news:
God's people celebrated the Passover, it was the best Passover ever (2 Chronicles 35:18) The good news lasted as long as Josiah lived.

Here are four things I get from this story:
1. God speaks to us through His word, and will guide us into the right actions.
2. God responds to true humility. In 2 Kings 22:14-20a, a prophetess delivers good news to Josiah, that God will hold off destruction of the nation until Josiah’s gone, because, in verse 19, Josiah had humbled himself
3. Leaders take responsibility for those under their authority. In 2 Kings 23:1-3 Josiah made sure all the people under his leadership heard the Word, and that they entered the covenant.
4. Repentance for our sin (or the sin of people under our care) is essential. It's not a popular thing to talk about in the 21st-century American church, but we must be ready, willing, and able to acknowledge our sin and turn away from it. Forgiveness is not limited by the amount of sin, but by our willingness to repent. 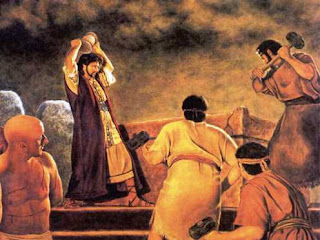 The most important element of this story: the idols
Although the Israelites had been committing all sorts of sins, they were barely mentioned in these passages, except for the one sin--idolatry--which led to all the other sins.
Idols are sneaky; the people in that time didn't really think about idolatry as a demonic or disobedient thing; it was just part of their culture. In ours, we watch football on Sunday afternoons, we tip 15-20%, we mow our grass, we talk about the weather. These people, from Josiah on down, had no clue that their cultural habits were offensive to a holy God, but in His mercy, He enlightened them and spared them from destruction.

An idol doesn't have to be a statue, and it doesn't require incense. An idol is simply defined as anything we place as a higher priority than God. We should ask God to show us what our idols are. We don't do a lot of sacrificing to wooden or stone statues, but we still have ways to making something -- even something that doesn't seem sinful -- more important than God.

In Exodus 24, Aaron saw God.
In Exodus 32, Aaron made a golden calf.
I asked myself, how could someone see God, be so near to Him as to glance at His feet, and then turn around and worship a god that is no God at all. And then I remembered, I’ve done it too.—Jackie Hill Perry


The best news
Once we are willing to get idols out of our lives, God comes through; we experience an unfiltered relationship with Him that is better than anything we were replacing Him with. We wonder why we ever thought that other thing was better, or more enjoyable, than communion with Him.

What to do when the idols are gone:
Josiah reinstituted the celebration of Passover instituted; these reforms weren’t all about getting rid of stuff; that's only half the task. The principle here is that if you cleanse the house, you still need to fill it back up with God, or else it will fill back up with something else. Luke 11:24-26 describes this in a sobering way:

When the unclean spirit goes out of a man, it passes through waterless places seeking rest, and not finding any, it says, ‘I will return to my house from which I came.’ And when it comes, it finds it swept and put in order. Then it goes and takes along seven other spirits more evil than itself, and they go in and live there; and the last state of that man becomes worse than the first.

In other words, there was never a king like Josiah. Not even David. Wow! What man wouldn't want this said about him?