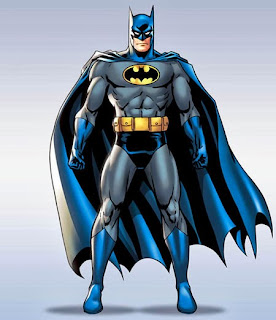 Before Miley Cyrus stole the spotlight Sunday night, approximately 75% of the nation's Internet's bandwidth was being consumed by comments about the selection of Ben Affleck as Batman in the upcoming "Batman vs Superman" movie.  Most of the talk was negative, some supportive, and some was just funny. (The best line: "I've just seen Christian Bale going to Affleck's apartment with some Huey Lewis records and an axe.")

The protests kept coming, drowning out admonitions from level-headed people like myself to just. calm. down. We're talking about a fictional character, people.

As one of the few who refused to contribute to the vitriol, I could step back and notice some things about the way these discussions were going. Besides the Bennifer and Daredevil references, the bulk of the protests (and even some of the pro-Affleck comments) focused on comparisons:

"Ben Affleck will be the worst Batman since that fat guy in the ill-fitting suit."

"Was Betty White not available?"

When we're talking about an iconic character who has been portrayed on screen by several actors (only James Bond has the same combination of iconic status + multiple well-known actors), comparisons are inevitable. So let's take a stab at ranking--worst to first, Casey Kasem-style--the actors to take on the role of Batman since 1960 on the large or small screen.

NOTE: I don't have Lewis Wilson, Robert Lowery, Bruce Thomas, or Kevin Conroy listed here, as I am unfamiliar with their work and frankly, so are all but the most dedicated Batman fans.


5. George Clooney
Although Clooney is not a bad actor, he mailed this one in. In fact, even he freely acknowledges his inability to handle this role, famously stating that he may have broken the franchise. He didn't. Somehow, he managed to salvage a career since then. Perhaps you've seen Clooney in a successful film or two since then.  I can't say the same for....

4. Val Kilmer
Kilmer was a better Batman than Bruce Wayne.  He did a good job, but it appears that he had trouble landing good acting jobs afterward. Kilmer's best roles (Tombstone, The Doors) happened mostly in the 9 years between "Top Gun" and "Batman Forever".   After that, not much to be proud of. Exhibit A: for the voice of KITT the car in the new Knight Rider.Exhibit B: The musical version of "The Ten Commandments"

3. Adam West
We all know the 1960's TV series (and the one movie) was campy. In fact, you look up the word "campy", and the dictionary shows a picture of Adam West as Batman. But he knew what he was doing at the time, and he played it to the hilt. He was in on the joke. He never tried to be "Tortured Son of Murdered Parents" Batman. He knew what he needed to do to make that TV series work, and he did it spectacularly.

2. Christian Bale
Bale played the role as one would imagine when reading the darkest versions of the comic books/graphic novels. Wayne/Batman was forever screwed up because his parents were murdered in front of him. He was a detective's detective. As Bruce Wayne, he was a great pretender.  He personified the type of man who could bring self-discipline of body and soul to unprecedented heights.

For all these reasons, he should be the best Batman ever. But Bale's performance has one very noticeable flaw: the voice. He went out of his way to not sound like Christian Bale, and to adopt a raspy voice similar of one of Marge Simpson's sisters. Many viewers, myself included, had a hard time not thinking about Christian Bale changing his voice as we were watching The Dark Knight, and ultimately, an actor's job is to make us remember he's not acting. The resulting loss of points knocks Bale to 2nd place, right behind...

1. Michael Keaton
The current negative comments predicting failure for Affleck have a ring of familiarity to those of us old enough to remember the announcement of Mr Mom/Beetlejuice/Johnny Dangerously as the new Batman. In fact, had this occurred after Al Gore came down from heaven and brought us the Internet, perhaps the outcry against Keaton would have been even worse than that we witnessed this weekend. But the fact is, he nailed it. When Tim Burton's "Batman" made its way into theaters, moviegoers realized immediately that Keaton was an excellent choice. He captured the tortured soul aspect of the character, but wisely avoided over-acting.

Of course, when you're sharing screen time with Jack Nicholson playing The Joker, under-acting is the wisest move you can make. But it's more than that. Keaton let the director direct. He let the other actors shine. He let the lighting & sets set the mood, and most important, he let his eyes tell the story. That's the mark of an excellent actor. His restraint, subtlety, and his anti-Beetlejuice persona was exactly what was needed. That's why the 1989 "Batman" is ultimately more enjoyable than the Dark Knight movies, and it's why Keaton is the standard that Affleck and future Batmen should aspire to.