Here is What's Doing the Most Damage to Christianity These Days 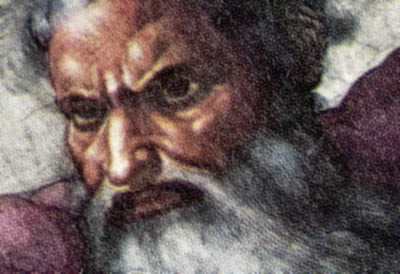 If you were asked to name the single biggest threat to American Christianity these days, what would it be?

Some will argue that laws curtailing free speech are doing the most damage to Christians today.

Some will argue that changing marriage laws and acceptance of various sexual sins are a bigger threat.

Some Christians seem to think that it's those Target employees who say "Happy Holidays" and find other ways to secularize Christmas.

From where I stand, none of the items listed above, which all originate from sources outside the Church, has as much potential to do the most damage to the cause of Christ and the work of the Church in America as this one thing, and it's coming from within:

Christians refusing to see God as He is, and replacing the real God with one which makes them most comfortable.

The most uncomfortable, difficult thing to accept about God is His anger, and the most difficult thing for 21st-Century American believers to accept is that we are to fear Him. As Exhibit A, I offer this. A large denomination has removed the song "In Christ Alone" from its hymnals, simply because it contains the line "Till on that Cross, as Jesus died, the wrath of God was satisfied".

Apparently, the existence of the wrath of God is an offense to many modern professing believers. Well, that's not entirely true. We want God to be angry at pedophiles, racists, telemarketers...you know, the same people we're mad at.  But the idea that God had wrath toward me?  Well, that's different.

I shouldn't have to say this, but I will: Jesus died on the Cross because our sin separated us from a perfect, holy God. We need a Savior because we aren't good enough to save ourselves. This has been a foundational, fundamental part of Christian belief forever. To remove the wrath of God from our faith is like telling a baseball team they have to use a football instead. Yes, they can still technically play the game with a football, but it won't look anything like real baseball. Just as Christianity which denies the wrath of God isn't real Christianity.

For 2000 years, Christians have understood that the Gospel message is, by its very nature, an offense to unbelievers. That's a given. But in a strange, sad, and unwelcome twist, some church leaders don't want to offend the sensitivities of believers.

"In Christ Alone" has another key line we all should meditate on: "No guilt in life, no fear in death."  That's powerful. That's something to embrace. Let's celebrate this truth by acknowledging God's wrath, and then by rejoicing in our freedom from it.