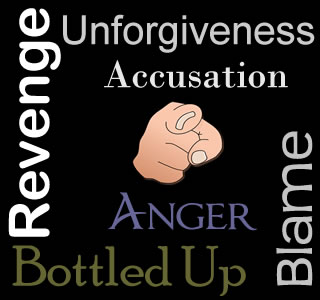 A short time after I started driving at age 16, I got my first speeding ticket, and countless more followed over the next few years. As I was working low-paying jobs at the time, I had to find an inexpensive way to resolve all these tickets. (Don't bother telling me about the best option--simply driving at or below the speed limit like a good citizen--I am very aware of that.)  I tried deferred adjudication, I tried getting a lawyer to get it off my record, and I even tried taking the defensive driving option.

Each of these remedies has its pros and cons, but I have to admit that I rather enjoyed my annual trips to defensive driving class. After attending it several times, I have become so familiar with the material that I feel like I could teach the class myself.

Another teaching I have heard countless times is the sermon about forgiveness.  I've been a Christian for a long time, and it's been a frequent sermon topic wherever I've been. Because of my frequent and prolonged exposure to this teaching, I thought I knew all there is to know about forgiveness. So imagine my surprise when I ran into some ideas in my personal prayer time that were fresh and new, at least to me. It all started when, a few weeks ago, I began to remember an incident which happened with I was just a 7th-grader.

Here's the scene: I was outside at school, during 6th period off-season workouts for football players who weren't on the basketball team. For reasons unknown, an 8th-grader came up and punched me in the face. To this day, I have no idea why he did this. But he hit me repeatedly, and by the time I gathered my wits enough to defend myself, others came over to break it up. Because nobody was around when this kid initiated it, it appeared to everyone that the two of us were fighting.

The head football coach, Coach Miller, came over and asked why were were fighting. I told him that I had no idea why, but this kid started hitting me. The kid said I shot a rubber band at him, which was not true. The coach had to decide who was telling the truth. He chose to believe the other kid, and then administered punishment to the both of us.

Whistle Sprints
This punishment came in the form of whistle sprints, an unpleasant practice where we are to run at full speed on the football field until the coach blows the whistle. When we hear that, we are to dive horizontally, straight ahead, and slide on the grass, then get up and start running till the whistle blows again, at which point we dive. Because this was winter, the grass was brown and not even a little bit soft. We were basically having to jump into hard ground which contained a negligible bit of grass.

I was upset, of course, that I was being punished so harshly, but even more painful was the fact that the coach didn't believe me.

Many years into my adulthood, I saw him in a restaurant, and I could have walked over and shaken his hand, but I chose to pretend I didn't see him.

The Scene As I Imagine it Would Happen
I had pretty much forgotten this unfortunate episode of my life, but recently it came back to mind. I began daydreaming. I imagined seeing the coach again, perhaps at a restaurant, and then telling him how wrong he was. I imagined him with a sad, remorseful, look on his face.

But then, I came back to reality as a sudden thought shook me: I realized that I had not forgiven Coach Miller for hurting me.  This came as a shock, because I really thought I had this forgiveness thing down. I began to ask God to explain this to me, and it was as if He said that as long as I held onto my right to tell this man how his actions had caused me pain, then I had not really forgiven him. My wish that Coach Miller would feel horribly guilty upon hearing this was effectively a desire to see him punished, and it was a desire that I would be the one administering the punishment.

So What is Forgiveness, Really?
Since then, I have been re-thinking what I know about forgiveness. Perhaps it's not what I think it is. I do know this: it's separate from forgetfulness. As many commands as I can find in Scripture to forgive, I have yet to run across one instructing us to forget. But in my case, I was holding on to the idea of letting him have it--verbally--and that thought is based on revenge. Revenge and forgiveness cannot be roommates. If I choose to live with one, then the other has to go.

A couple of weeks ago, a video clip has been making the rounds, getting laughs. Two Canadian football legends, now in their late 70's, were brought together onto a stage for the purpose of discussing their playing days on rival teams. It turned out that the two men were still angry at each other over a hit in a game some 50 years ago. They got into a fight, right there on stage. One man hit the other with his cane, then the fists started flying.


Although someone shared this story with me for humor purposes, I didn't laugh. What I saw was two men who let anger and unforgiveness suck the joy right out of their lives for 5 decades. Can anything be more sad?

In Unbroken, author Laura Hillenbrand describes the main character's obsession with revenge toward a cruel POW guard, then says this: "The paradox of vengefulness is that it makes men dependent upon those who have harmed them, believing that their release from pain will come only when they make their tormentors suffer."

I have been praying that God will show me if there is something I have been holding onto for years or decades. He has answered my prayer, and uncovered a couple of things I am not going to delve into here at this time. But the responsibility is now on me to truly let go, to forgive people I may never see again in person. It's on me to let go of my "rights" to make someone feel as miserable as they made me feel. I need to move forward, and not delight in the idea of letting someone have it.

God help me do it. Life's too short to let stuff like this drain the joy out of my life.