These Nameless Things, by Shawn Smucker: A Review 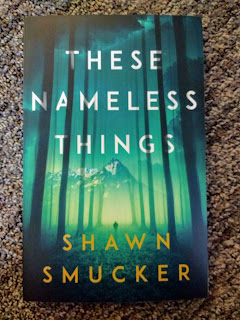 There are a few writers out there who come up with an original idea, flesh it out well in their first book, and then churn out more stories that are nearly identical to the first one. Shawn Smucker is not one of those writers. His newest, These Nameless Things, is the third Smucker book I have read, and each has been great, and none of them are alike. That's a great thing.

Of course, it means I cannot help you out by comparing it to any of his earlier novels. If I were to compare it to any other stories, the closest I could come is that it contains elements of Dante's "Inferno",  "The Lord of the Rings" (because there's a journey with obstacles to overcome--no elves or wizards), "Lost" (the TV series), and "The Fisher King," a 1993 movie starring Robin Williams and Jeff Bridges.

I mention "The Fisher King" because that one is a story about how we can simultaneously have to face the consequences of our actions while receiving forgiveness. It doesn't have to be one or the other, but both of those require something of us. And that something can be hard, but well worth it.

I hesitate to describe the story in too much detail here, because spoilers. The main character, Dan, is living a fairly blissful existence until disruptive events stir up old memories for Dan and his friends. The more these layers of memories begin peeling off, the more he is stirred up to meet those scars head-on, and to let go of his pride and be transparent about his failings, in order to save a family member and others.

The story is compelling, the characters are described well enough to get to know them, and the ending is satisfying. I'm glad I read it, and I recommend it to anyone. Although Smucker's earlier book, "The Day the Angels Fell" was aimed at a teen audience, "These Nameless Things" is more for adults (it's not rated R; it just isn't a kids' story).

As I said at the beginning: every time I have read a Shawn Smucker book, he's come up with a unique idea. I can't imagine how one author can have so much creativity, but I'm already looking forward to reading whatever he's working on next.