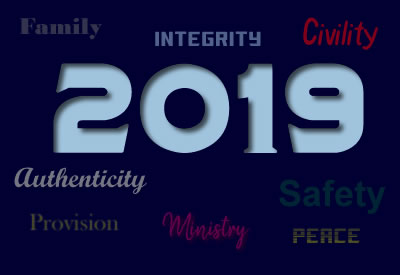 At the end of each year, Miami columnist Dave Barry, one of the funniest cultural observers of my lifetime, recaps the previous year in a humorous way. Barry's strength is pointing out our political posturing, our misplaced priorities, and the way we take it all too seriously. His recap of 2018 is a must-read and is located at  https://www.miamiherald.com/living/liv-columns-blogs/dave-barry/article223204095.html

With no promises of being as sharp as Dave Barry, and not trying to be funny, I present to you my in-no-particular-order list of what I pray that 2019 will bring. Some of this is personal to me, and some is for all of us.

2. I hope to go through 2019 without once seeing a link with the headline "Watch as (fill in the blank) DESTROYS (fill in the blank). This is almost always a link to a video where one person who takes a side in a contentious or divisive issue utters a bullet point or two in support of his/her position. Nobody actually gets destroyed.
Really, why would you want someone to be destroyed (verbally or otherwise) simply because they see that issue differently than you do? And why would you want to cheer someone on as they deliver some points that you agree with?

3. To know my loved ones on a deeper level. My favorite musician, Mark Knopfler has said he just wants to learn more and more about the guitar. He's an absolute master at it. If he needs to know the guitar better, then how much more is it on me to know my wife better? To know my kids better. I hope that in 2019, I will do both.

4. I hope to never hear, in any discussion about President Trump, the following phrase: "We elected him to be president, not pastor."

5. I hope to never see a clickbait headline worded thusly: "Everything you know about (fill in the blank) is wrong."   Eyeroll. Why would anyone think this is worth clicking on?

6. I hope that the new Avengers movie will not culminate with a Flash-like cop-out.
If you'll allow me to compare a Marvel movie to a DC TV show:   I watched the first couple of seasons of "The Flash" TV Series, and each episode, it seems, centered on a dilemma which should result in destruction of the universe, but somehow, before 60 minutes is up, Cisco has invented something that has never been invented by the greatest scientific and/or engineering minds in human history, and he puts it together in a few minutes and saves the universe.

As you are no doubt aware, Infinity Wars ended with Thanos putting an end to half of all living creatures everywhere, including beloved characters like Black Panther, Bucky, and Spider-Man. But we also know that new Spider-Man and Black Panther movies are on the way, so there's no question that the deceased will be restored somehow.

My hope is that the rescue of the recently-deceased will have more believability (to the extent that it's possible for a comic book movie) than what we saw Cisco, Barry Allen, and Harrison Wells come up with. Any cheesy cop-out solution will be a letdown.

7. I hope to see fewer friends giving props to the blowhards. I hope that, as we approach the 2020 Presidential election, my Facebook friends will distance themselves from, and refuse to post quotes or videos featuring, problematic outspoken celebrities or pundits such as Ted Nugent, Keith Olbermann, Matt Taibbi Newt Gingrich, etc. The one thing they all have in common: their methods of communicating their message through insults and hyperbole.  The list of offenders is a long one, but the point here is the same: if you cannot articulate your position in a thoughtful way, then you're not helping. When we (social media users, authors, etc) lift up blowhards and give them credibility by quoting them or sharing their video clips, we're making things worse.

Find people who speak truth from a similar perspective to yours, but who behave like adults when doing so.

8. My life will matter. I want to have an effective ministry (or two or three) in 2019.  Whatever I need to be doing that's in line with God's plan, that's what I want to do. As a subset of this wish, I hope to write more. My biggest holdup is I have no idea what to write about.

9. No mass shootings. I'm not so naive that I think it's possible that no murders will be committed anywhere for an entire year, but if we can at least go that long without someone randomly shooting multiple innocent souls at a school, concert, synagogue, or other public place, that would be a nice start.