A powerful, seldom-used weapon in our arsenal 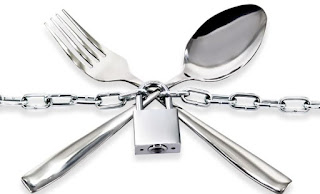 Our church's current sermon series is designed to steer members towards those practices which will help us focus on devotion to God. The topic of the most recent sermon is fasting, a rarely-discussed  practice for many American Christians.

For the first 40 years of my life, I regarded fasting as strange, practiced only by people we read about from thousands of years ago but not in the 21st century. It was something you'd read that people did back then, like churning butter, or taking sacrifices to the temple.  But around a decade ago, I heard a teacher make a point that stuck with me:

Trust me; I checked all the translations. They all say "when", not "if". And because this verse is part of a teaching which includes currently-accepted verses such as the Lord's prayer, the importance of giving to the poor, and not serving two masters, we can't chalk up His words about fasting to some cultural thing that applied to a certain group of people at a certain time.  That opening phrase, "when you fast" carries an implication  that this is expected behavior and part of our spiritual development.

Since coming to this realization, I have fasted a few times, but not regularly. Allow me to share my most meaningful experiences with fasting:

1. In 2001, my wife and I found out that we were expecting twins. The doctor sat down, and with a serious look on her face, said "Look, I know that the idea of twins is a bit of a shock. And as you tell others, you're going to hear comments which begin with 'awww, how precious!', and talk about matching outfits and rhyming names. But the truth is, having multiples carries serious risks. One twin could rob the other of a significant amount of nutrition. Cords could get tangled. And there's a high risk of prematurity. In fact, full-term pregnancies almost never happen with multiples. So be ready for preemies and the NICU."

To this day, I'm thankful for that doctor's frankness, because my response was to fast one day per week for the rest of the pregnancy. And in case you're curious about the results, Jacob and Abby were born healthy and full term. At birth, Abby's cord was in a loose knot, but a doctor's decision, made prior to knowing that, ended up saving her. My decision to fast worked, and I have two healthy 16-year-olds to show for it.

2. Several months later, our church, which was smaller back then, had a kind of open-mike community time one Sunday morning. I felt I was supposed to give a public testimony about my fasting experience from during the pregnancy. But I didn't get up there to grab the microphone that morning. The next week, there was another call for testimonies, and I felt I should go up there, but there wasn't time for all of us who wanted to speak. The following week, something similar happened.

Finally, for the 4th week in a row, I felt the urge to go up there, and I did. I told the story you just read in bullet point #1 above. I ended it with this: "I'm sharing this story because I feel someone in this room needs to hear this. You've been praying for something, and not seeing an answer, and you need to consider engaging in a fast to get the answer you're looking for."

After service was over, I was chatting with someone, and a woman I didn't know came up to me. She said that she was a visitor to our church, had never been there before. She had, in fact, been asking for God to do a particular thing, and it wasn't happening, but as soon as she heard what I said, she knew it was for her.

3. A couple of months ago, I decided to go on a 3 day fast, and when it was over, I felt God had spoken two things to me. In fact, both had to do with me letting go of something that had a hold on me. The fast not only alerted me to these strongholds, but also strengthened me to break free. Neither of those issues  has been a problem since then.

4. I recently lost my job, and I chose to fast for a couple of days, just to hear what He has to say to me about where to go forward. Since then, I've been more in tune with God and His word than I have in a long time. I'm more spiritually aware. And, as with my previous 3-day fast, there are certain strongholds, temptations, that are much easier to resist now.

Of course, Scripture tells us that fasting can be useful for more than what I have described here. Jesus said in Matthew 17:21 that a particular demon only comes out by prayer and fasting. I haven't experienced anything like that, and I hope I never need to. But that story tells us a truth we can all use: fasting is a very powerful weapon that we have in our arsenal. There's no good reason not to use it.

Disclaimer: anyone reading this who decides to enter into a fast shouldn't do so if they have any health issues, so if that's you, please consult a doctor first.