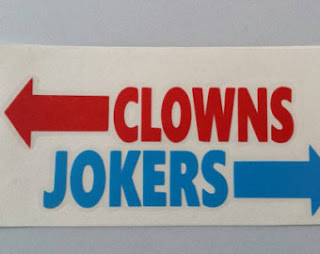 I had been looking forward to 2016.  My oldest kids were turning 15 then, and I had been anticipating that this was to be the first presidential election that they would be likely to follow through the party-specific campaigns as well as the general election. But what they witnessed, particularly during the debates, was a train wreck. Yes, Donald Trump was embarrassing, but he wasn't the only one. Other candidates, as well as party leaders and even pundits, expressed their views in the worst possible ways. It was as if Jerry Springer took over. It seemed everyone who had anything to say said it as loudly and divisively as possible. And as I write this a year after the election, issue-driven conversations between office-holders as well as between regular people have only gotten worse.

Since the late 80's, when I first became politically aware, discussions about politics have devolved; this is not news to anyone. But the discussions of why the current state of political discourse is so acrimonious has missed the root causes.  Many fingers have pointed at the Internet, which allows the previously unheard masses to throw unfiltered barbs disguised as political positions, emboldened by anonymity. While it's true that we say things to others online that we'd never say face-to-face, I find the argument that this is the reason for the lack of civility to be incomplete.

The truth is that political divisiveness was becoming more pronounced before the Internet was in every home. The cutting remarks we see online are the symptom; not the problem. Just as the web is not the cause, neither is talk radio, although I'd argue that talk radio and online discussions have deepened the divisiveness. Nor are cable news networks the cause of all the hostility, although the fact that the best-known networks have retreated to one political camp or the other has not helped.

No, finger needs to be pointed at something more simple: distraction.

By this, I mean that the people who care about our nation and about their respective local communities enough to have such discussions have been thrown off the trail and have let themselves become misdirected by having their focus shifted toward tangents rather than the core truths which should shape our opinions.

Thus, those on the Right come to regard liberals as welfare-sucking tree-hugging baby-killers, while Leftists think of conservatives as racist neanderthal Pharisees.  Negative thoughts about liberals or conservatives keep us from thinking of what liberalism or conservatism really mean, about the differences between them, and about what positive or negative impacts they have.

It's time to push the Reset button. I'm convinced that if we see Right and Left philosophies for what they really are, and hear what they really say, we won't bother with the name-calling and division. Ideally, we'd consider the core ideas behind these differing political perspectives, and formulate some actual solutions.

It is with this understanding that I will use as a basis for my next few blog posts. I urge readers to consider what is being said, regardless of your Left- or Right-leaning views which you come in with. I assure you I will be as objective as I can when I write them.