The Real Reason Racism is Wrong 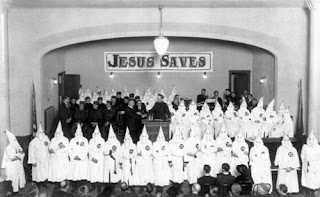 Racism has never not been a hot topic of discussion in our nation. Disputes over racial matters have resulted in:

1. A compromise that slaves should count as 3/5 of a person. This was written into our Constitution.

Really. I wish I were making this up.

3. Decades of post-Civil War mistreatment of non-whites during Reconstruction, to include lynchings, voter suppression, and multiple forms of discrimination, most of which went unprosecuted.

4. Supreme Court rulings, boycotts, sit-ins, Civil Rights marches, formation of various groups to promote the advancement of various races, as well as groups like the KKK.

5. Concerns, lawsuits, and protests about police treatment of nonwhites.

Some well-meaning Christians offer reasons to take a stand against racism, but do so with a man-centered approach. That is, we are told that racism has no place simply because (a) it's not fair; (b) all humans should be equal under the law; (c) all citizens should have the same opportunity to have life, liberty, and the pursuit of happiness, among many other reasons.

While I agree with all of these, they fall short of the most important reason why racism is evil. They focus on the effects of racism on our fellow man. And while our fellow man is important, let's don't lose sight of the fact that God is infinitely more so.

We humans are not the center of the universe: God is. Jesus is the central figure in all history; everything and everyone was made for Him and by Him.

So what harmful effect does racial hatred do when it comes to Jesus and His agenda? It's quite simple. God the Father promised the nations to His Son:


“I will surely tell of the decree of the LORD:
He said to Me, ‘You are My Son,
Today I have begotten You.
‘Ask of Me, and I will surely give the nations as Your inheritance,
And the very ends of the earth as Your possession.
Psalm 2:7-8

Although this Psalm is from the Old Testament; it's very clear that it's speaking of Jesus. Moreover, the word "nations" used in v.8 comes from a Hebrew word which means "people groups." Ethnicities. God is saying that Jesus will receive, as an inheritance, people from every race on the planet. It follows that any movement or thought process which seeks to elevate the people of one people group at the expense of others flies in the face of God's directive that all races are an equally valuable portion of His inheritance. Any effort to exclude, minimize, persecute, enslave, or otherwise do harm to any people group is going against the very will and purposes of God Himself.

Anyone who claims to be a bible-believing Christian, yet thinks racist thoughts or attempts to carry out a racist agenda is disobeying the most fundamental tenet of being a follower of Jesus: it's about Him, not about us. If you claim to believe in the authority of Scripture, but your thoughts and actions conflict with this basic truth that people from every tribe and nation will one day stand next to each other and worship Him, then you are ignoring the very bible you say you believe in.

I'll take this a step further: racism is demonic. Satan is the one who opposes God's agenda, and racism is in direct contradiction with what God has said is a very fundamental part of His plan. When we choose to hate or discriminate against someone because of the particular people group they descend from, then the devil himself is laughing.  And I don't ever want to do anything that has his approval.