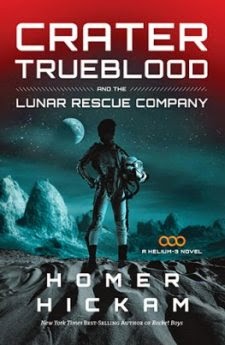 Crater Trueblood is the third in Homer Hickam's Helium 3 series of novels, after "Crater" and "Crescent".  The main character in all 3 novels is Crater, who, in the course of the story, transforms from a young man who works as a Moon-based miner to an owner of a search-and-rescue business who ends up saving the world. And in this case, "the World" means what remains of humans, who no longer live on Earth but on the Moon.

A young female protagonist, Maria, is an antagonist for part of the story, but it's fairly obvious from the get-go that she and Crater are meant to be. Other characters include Crater's brother and business partner, and then there are litle creatures called gillies, kind of like pets but who have minds of their own.

My son read the first Crater book at the age of 10, and now, at the age of 12, has completed the new one. This series is among the very few works of fiction being offered by Christian publishers these days in which the target audience is young pre-teen or early-teen boys. If you have a son in that age range who likes adventure, the Helium 3 series is well-written.

Unknown said…
Hello, James! Mike Morrell asked me to contact you because he really appreciates your blog and thinks you'd be an excellent candidate for his Speakeasy Blogger Network. Do you like to review off-the-beaten path faith, spirituality, and culture books? Speakeasy puts interesting books in your hands at no charge to you. You only get books when you request them, and it's free to join. Sign up here, if you'd like: http://thespeakeasy.info
July 28, 2014 at 11:40 PM