When Mockingbirds Sing, by Billy Coffey: A Review 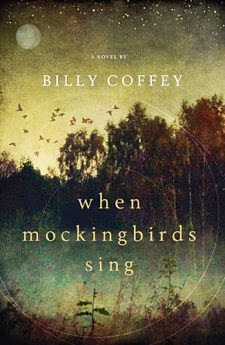 Through Thomas Nelson Publishing's Booksneeze program, I obtained a free copy of Billy Coffey's "When Mockingbirds Sing" for review purposes. I'm free to give my honest take on this book. This paragraph is here to make the IRS happy.

I started reading Coffey's blog about 2 years ago, and along the way, I read his first two novels, "Snow Day" and "Paper Angels". The former is a nice first effort, while the 2nd is not only an improvement, but with it, he demonstrated an ability to walk the fine line between saying something profound and not trying to sound like he's trying to be profound.

"When Mockingbirds Sing" continues in that direction, but the result goes from being merely good to remarkable. The author manages to tell a compelling story that contains important truths without the reader feeling he's being preached to.

I've never written a novel, but it seems to me that the difficulty of writing fiction for the Christian market is that readers are examining anything that might look like a theological statement, and comparing it to their doctrine, looking for holes.

Equally difficult, I imagine, would be avoiding the temptation to preach directly to the reader. One doesn't have to think very long to recall some well-meaning books which consist of God speaking through a character, to another character, when the reader is supposed to realize he's really the one being talked to. Such works are exhausting to read, and not satisfying.

In "When Mockingbirds Sing", I am impressed with Coffey's ability to turn a phrase, to tell a great story with a powerful ending, and to not make me feel like I have been lectured.  Additionally, I'm impressed with the characters he has described. In fact, I grew to like several of the main ones to the point that I actually got unnerved at the unfairness of the actions of the antagonists. After a few minutes, I realized I was furious at nonexistent people, and I let it go, but anytime a story takes you to a place where you can get mad at a character, that's a well-crafted story.

Perhaps a plot description is in order: It's set in a small Virginia town. A family moves in from a larger city, and it doesn't take long for their little girl Leah and her imaginary friend, the Rainbow Man, to issue some prophecies through her words and her paintings. She gains a loyal friend, Allie, whose personality and spunk bear a strong resemblance to Scout, from "To Kill a Mockingbird".

The local pastor cares deeply about God and about the people of his church, but he has a difficult time grasping the idea that a little girl with a speech impediment could be used by God when he had been serving God all his life and has yet to hear God speak. In the story, the community puts misguided faith in Leah when her paintings and prophecies come true, and we see those same folks turn against Leah later. We see our own shortsightedness and judgmentalism in some of the characters, but as I said earlier, the author shows us this in the course of an engaging story, not guilt-driven sermon under the guise of a story.

We see a marriage in trouble. Hard things happen. And then the ending. Oh my. That ending. I can't say much about it, but let me just say, "When Mockingbirds Sing" ends in a strong and powerful way.

I really loved this book. I have three hopes for it: (1) It will become popular through word of mouth; (2) someone will make it into a movie without making major changes; and (3) the characters that were introduced will be further developed in future works from Billy Coffey.  Till then, read the book. You'll be glad you did.