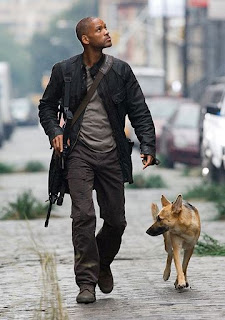 I recently watched "I Am Legend" for the first time in a couple of years, and the 2nd time ever. I'm not a big zombie-movie guy, but this one is different. My first time watching this film left me satisfied with the notion that I had seen a well-thought-out, intelligent movie, not afraid to pull punches nor to explore important topics that go way beyond typical zombie/apocalyptic movie fare.

The second go-round, though, was disappointing. I noticed plot holes so blaring, so huge, they could not be ignored. I was left with an uneasy feeling that I had been duped the first time around, tricked into thinking I was watching something thought-provoking and cleverly put-together.

I'm holding out hope that the incongruencies I observed were based on some misunderstanding on my part. That's why I am inviting you, the reader, to help explain to me those items which are troubling me, and to assure me that the "I Am Legend" plot is not as full of holes as it appears. I really don't mind being corrected on this one.

1. In the scene where Robert (Will Smith) wakes up from hanging by one leg because he stepped into that trap, the zombies, accompanied by zombie dogs, are viewing the goings-on from the shadows, because there's still a sliver of sunlight left. Then the sunlight goes away, and the dogs come out, in full attack mode. But the non-dog zombies, who were right there with the dogs, did not come out and attack Robert. Why? Didn't the absence of sunlight open up a window of opportunity for them just like it did their pets?

2. In flashbacks, we are told that the government tried to contain the virus to Manhattan by keeping residents on the island, and blowing up all the bridges. But late in the story, Anna comes driving up to rescue Robert, and later she drives away from the island to Vermont, in the same car. How did she get to the island and then leave the island without a bridge?

3. At the end, the safe place in Vermont is protected by walls which seem about 10-12 feet tall. Maybe 15. But the zombies demonstrated that they can climb up multi-story buildings with ease. How is that little wall going to keep them out?

4. Anna saves Robert by shining her headlights, not real sunlight, on the zombies. So they obviously cannot stand artificial light. But when they invade his apartment, and go down to his lab, they have no problem being in a well-lit room.

5. Before Robert blows himself up, he tells Anna to stay in the little cubby-hole till dawn. What good will that do if they are inside?

6. The zombies are able to figure out where he lives when they follow Anna home, but why didn't they follow him home the previous day, when they had Robert hanging and attacked his dog? That occurred right at sundown.

I guess these will do for now. Somebody tell me the error of my ways, and restore my faith in "I Am Legend."

#2 In the original ending of the movie, it was shown that all the bridges were destroyed except for the George Washington bridge. Patrols were stationed on that bridge to control access on and off the island, and a sign was posted with a WARNING that Manhattan was a restricted area and that it was unlawful to enter without permission of the Installation commander. When the ending was changed for theatrical and DVD release, that scene was cut from the movie, leaving no explanation as to how Anna could have gotten on and off the island.

3. The wall seems much taller than 10... maybe 20... but in that area of vermont there would be a lower population density to begin with, so the zombies would be farer and fewer in between, and could be made light work over with sufficient arms...

Unknown said…
4. You get lights that give off UVB and UVA lights. I suppose it's possible that someone who realised their weakness put those type of headlights in the car and then she just took it? It's a wild shot but hey you never know.
Also about 5(actually adding a plot hole here): he could have easily killed the darkseekers without killing himself. There was space for him with the woman and child aswell. Personally I'm a bigger fan of the ending where it reveals that the darkseekers saw him as the monster(legend), and that they were simply trying to get the female back
April 7, 2017 at 7:47 PM