Why I Won't be Eating Chick-Fil-A on August 1 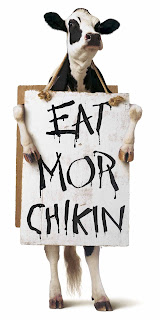 Conan O'Brien recently remarked that it's a shame that our nation is divided along line lines of where you buy your fried chicken sandwiches. Of course, when he said it, it was funnier. But I'm having a hard time finding this episode funny any more.

As you no doubt are aware, Mike Huckabee appears to have gotten a lot of support for his declaration of August 1 as Support Chick-Fil-A Day. Clicking http://www.isupportchickfila.com/ will take you to the Facebook page he has set up, inviting people who agree with CFA CEO Dan Cathy regarding same-sex marriage to show their support by spending money at Chick-Fil-A on Wednesday, August 1.   Over half a million have agreed, by "Liking" the page, and have pledged to go.

For the record: I love Chick-Fil-A. I also hold a biblical view of same-sex relationships. Just a guess, but I'll bet Cathy and I vote very similarly. Additionally, I am very disturbed at the reaction from pro-gay individuals and organizations over the past week, much of it very unfair, and some of it (threats by local politicians to keep CFA from doing business in their respective cities) is not only illegal but a blatant example of bullying.

So what reason could I possibly have for not participating in an event which is designed to demonstrate support for a company that has been on the receiving end of this kind of treatment?

Simply put: there is nothing about the "in-your-face" reaction that reflects Christ. You won't find anything, anywhere, in Scripture which directs Christians to stick it to those who disagree with them. You won't see Jesus advocating this kind of response to those who persecute you. Whether you believe that the anti-Chick-Fil-A crowd is guilty of persecution, or if you want to tame that accusation down to bullying, there is no biblical precedent for teaching the bullies a lesson in this way.

Take a look at the few times that Scripture mentions how Jesus, (or, after His ascension, His followers), deal with opposers. When Stephen was the first martyr, did the Church protest? When Paul and Silas got jailed, were the other Christians beating their chest, demanding their rights? No, they were in a house, praying.

[This is not to say that the anti-CFA people are persecuting Christians, certainly not on the same level as we see in the book of Acts, but it's the closest example we have in the bible. The focus here isn't on the pro-gay adherents. I'm trying to draw your attention to the reaction of the early saints.]

Besides the aforementioned reason to not respond this way, there's also the unfortunate result: counter-protests. Already, several pro-gay organizations are arranging events such as the same-sex kiss event on Friday Aug. 3.  If this thing becomes a tit-for-tat fight between the two sides, then Chick-Fil-A stores will become the center of multiple protests. People who don't want their kids to see men kissing men will stop eating there. Is that what we want?

When His followers tried to drag Him into political and culture battles, Jesus repeatedly replied that His kingdom is not of this world. Who among us thinks that by flexing our muscle on August 1, we're going to change anyone's heart? That we're going to help even one person know Him better?

I don't know what I'll do for lunch tomorrow: I'll certainly pray. I encourage Christians to ask WWJD? and do the same.

Luke Montgomery said…
It's so simple, isn't it? But then Mike Huckabee would get all the attention, would he?. One day we shall all know with a certainty beyond words that the politicization of faith has been a huge mistake. Of course, it will be too late then...
July 31, 2012 at 11:28 AM

Corrine said…
I just thought it was about showing support for Cathy and Chick-Fil-A, thanking him for not being afraid to speak as he believes. At least, that's what I've been hearing and what the Facebook page says. I'm not seeing anything about it being an "In your face liberals!" kind of event. But I appreciate where you are coming from, and agree with your viewpoint. I'll be skipping the event, too. Not that I don't want to show support, but that Chick-Fil-A is almost impossible to get into on a normal day. The crowds on August 1 will be insane, and maybe in more ways than one.
July 31, 2012 at 12:20 PM

Anonymous said…
Thank you for writing this. I am so, so, so sick and tired of Christians who think they have been called to be the moral police of the world. And who engage in tit-for-tat, like children on a playground exchanging insults. You are so right that Jesus never encouraged this at all, anywhere that I can see. Christians do not really trust the Holy Spirit, bottom line. I believe that is the reason they get so caught up in trying to 'correct' everyone else.
July 31, 2012 at 1:30 PM

James said…
Corrinne, I'm all for supporting CFA, But last night, I saw a FB post which indicated that, for some, it's more about showing the pro-gay crowd how wrong they are, and I started to get troubled by that. I never see Jesus tell us to be defiant, especially when it comes to non-salvation topics.
July 31, 2012 at 3:00 PM

Grace said…
I don't agree. I think it is solidarity for what you believe in. Chick fil-A was making a stand for what they believe and whether it is a personal friend or a business I am totally going to support them and encourage them to continue making a biblical stand. I do not see it as bullying at all. Oreo's took their stand and made a gay pride cookie, or you not going to take their stand because they are making their stand against God's Word?
July 31, 2012 at 5:59 PM

James said…
Grace, the biblical example I see of taking a stand is not anything like what I am seeing this week amongst my fellow believers. Taking a stand back then meant simply not participating in idolatrous behavior (Shadrach and the other two), praying for Peter while he was unfairly incarcerated (Acts 12:5). The biblical model is a good one.
August 1, 2012 at 7:43 AM

Amanda Reed said…
Thank you for the voice of reason! If you and I were to sit down and talk, we'd probably have a lot of differences politically and theologically... but the one thing that is greater than all that is our mutual love of Jesus Christ and our mutual desire to follow Him. It was refreshing to see that even from opposite sides of the aisle (so to speak) we came to the same conclusion: hot-headed culture wars over earthly things that will pass away are foolish and distract from the greater purpose of living as Christ's hands and feet in this world (but not of it). Oh--one other difference we would have... I've never liked the taste of their chicken and never considered it a "good meal". LOL
August 1, 2012 at 11:14 PM

Robin said…
What I saw yesterday was a show of support. I don't think a person there had an "in your face" attitude. Those who oppose Chickfila may be taking that way, I do understand, but I don't think that's the intent at all. It was a very peaceful, show of support for a company that supports biblical marriage. I have a feeling that August 3 will not be nearly as peaceful---
August 2, 2012 at 7:52 AM

Anonymous said…
Taking a stand is also doing what you do despite the world around you... Daniel prayed before and after the law was made not to pray... that's how the people who hated him knew to catch him living his life for God. Making a stand is not just praying, it's faith that is alive and true and shines through a simple statement of faith or the choice to support or not support.
August 2, 2012 at 11:35 AM