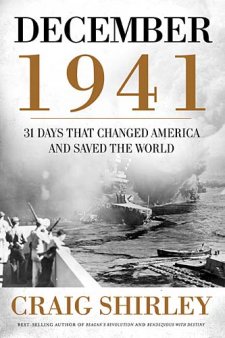 Craig Shirley's "December 1941: 31 Days That Changed America and Saved the World" is a powerful account of the days leading up to, and the days immediately after, the Japanese bombing of Pearl Harbor and subsequent entry of the United States into World War II.

This 500+ page book (600 if you count the notes) has a very simple format: it devotes one chapter to each day of the month of December 1941. The chapters describe the events of each day, either directly or indirectly related to the coming war.

Of all the things I learned, I was especially surprised that, prior to December 7, the mindset of many Americans was not in favor of the United States entering the war. We are used to such things regarding the Vietnam war and the wars in Iraq and Afghanistan, but the image we tend to get of 1940's America is that of solidarity. In fact, the national mood changed quite a bit as of December 7, but even then, it wasn't a case of undisputed unity.

The stories and information in "December 1941" are excellent. I received a copy of this book for free for review purposes, with no obligation to deliver a positive assessment. Still, I highly recommend it for anyone interested in history, especially World War II buffs.

The Old Gringo said…
Not exactly up to William Manchester in literary quality, I found this to be a good read right down to the last lines of Page 255 and the first of Page 256, where I found this:

"But in 1941, Hermann Goering's mighty Luftwaffe ruled the skies. The British had already lost two aircraft carriers to air assault, the Courageous and the Glorious..."

My respect for the knowledge and research of the elder and the younger Mr. Shirleys has now been lost. The British did lose the two aircraft carriers to German action, but the first was torpedoed by a U-boat and the second managed to get itself sunk by the only two modern battleships Germany had in the 1940 Norwegian campaign. Anyone with any claim knowledge of World War II should have known about these early and serious war losses. If the authors got this wrong, how many of their other factoids are really true?
Once could also wonder exactly what "contract agent" Craig Shirley was doing for the CIA. Maybe he was one of the WMD experts who did such a bang-up job in the run-up to our second war with Iraq?
December 7, 2011 at 8:47 AM